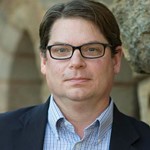 W. Bradford Wilcox is  Professor of Sociology at the University of Virginia, where he is also Director of the National Marriage Project, and a Visiting Scholar at the American Enterprise Institute, and a Senior Fellow at the Institute for Family Studies.

Professor Wilcox’s research has focused on marriage, fatherhood, and cohabitation, especially on the ways that family structure, civil society, and culture influence the quality and stability of family life in the United States and around the globe. His research has been featured in The New York Times, The Wall Street Journal, The Atlantic, Slate, National Review Online, NPR, NBC’s The Today Show, and many other media outlets. He has also published articles on marriage, cohabitation, parenting, and fatherhood in The American Sociological Review, Social Forces, Journal of Marriage and Family, and Journal for the Scientific Study of Religion.

In his latest work with Nicholas H. Wolfinger, Soul Mates: Religion, Sex, Love, and Marriage Among African Americans and Latinos (Oxford, 2016), Wilcox shines a much-needed spotlight on the lives of strong and happy minority couples. His first book, Soft Patriarchs, New Men: How Christianity Shapes Fathers and Husbands, (Chicago, 2004) examines the ways in which the religious beliefs and practices of American Protestant men influence their approach to parenting, household labor, and marriage. He is also the coauthor of Gender and Parenthood: Biological and Social Scientific Perspectives (Columbia, 2013, with Kathleen Kovner Kline).

Wilcox consults regularly with companies such as Nestle, Procter & Gamble, and Kimberly-Clark on fertility and marriage trends in the United States.

Read the abstract of the paper Professor Wilcox presented for STI's Whither the Child? experts meeting.

Read a summary of Soft Patriarchs.

For more on his academic research, see: