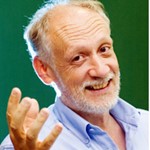 Nicolas Gisin serves as the head of the Group of Applied Physics at Geneva University. In August 2009, he was awarded the first Biennial John Stewart Bell Prize for Research on Fundamental Issues in Quantum Mechanics and their Applications for his theoretical and experimental work on foundations and applications of quantum physics. His latest publications include: Quantum nonlocality: how does nature do it? (Science, 326, 1357-8, 2009); Quantifying multipartite nonlocality, with Jean-Daniel Bancal, Cyril Branciard and Stefano Pironio (Physical Review Letters, 103, 090503-1/4, 2009) and  A solid-state light-matter interface at the single-photon level, with Hugues de Riedmatten, Mikael Afzelius, Matthias Staudt and Christoph Simon (Nature, 456, 773-777, 2008).

Watch the video of Professor Gisin's speech at the John Stuart Bell Prize event, and view his slide presentation on Quantum Nonlocality.

Professor Gisin received his PhD in Physics from the University of Geneva. He was awarded the 2014 Marcel Benoist Prize, considered the "Swiss Nobel Prize."

Read the abstract of the paper Professor Gisin presented for STI's Is Science Compatible with Our Desire for Freedom? experts meeting. View his presentation slides.