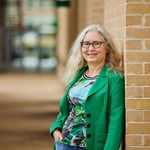 Renée Adams is a Professor of Finance at Saïd Business School, University of Oxford. Her work focuses on information flows on boards, bank governance, group decision-making, the governance of central banks and gender diversity on and off boards.

Professor Adams' work on gender diversity has received global media coverage. Her work has been featured in news outlets such as the Financial Times,  The Economist, The Daily Telegraph, Boston Globe, Australian Associated Press, NK (Norway), Politiken (Denmark), DN (Norway) among others.

She has served in a variety of roles in the main professional associations and at numerous journals and was director of the Finance Research Network, a network of major Australian universities for 5 years.  She currently sits on the Council of the Society for Financial Studies (SFS) and serves as a Finance Department Editor at Management Science. She co-founded AFFECT, the American Finance Association’s 'Academic Female Finance Committee,' in 2015, and currently chairs it.