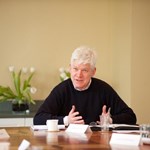 John Haldane is Professor of Philosophy at St Andrews University where he is also Director of the Centre for Ethics, Philosophy and Public Affairs,  and currently Head of the School of Philosophy, Anthropology, Film and Music. He is a Fellow of the Royal Society of Edinburgh, and of the Royal Society of Arts, and an Executive Council member of the Royal Institute of Philosophy. He has held the Royden Davis Chair in Humanities at Georgetown University, in Washington DC and been Stanton Lecturer in Cambridge University, Gifford Lecturer at Aberdeen University, and Joseph Lecturer at the Gregorian University in Rome. He has also held fellowships at the universities of Edinburgh, Oxford and Pittsburgh, been visiting professor at several US institutions. He is currently is a Senior Fellow of the Witherspoon Institute in Princeton.

John Haldane has published some 200 academic papers covering areas such as the history of philosophy, philosophy of the mind, metaphysics, and moral and social philosophy.  He is the co-author of Atheism and Theism  and author of An Intelligent Person's Guide to Religion (Duckworth).  He has produced two volumes of essays on philosophy and religion entitled Faithful Reason (2006) and Reasonable Faith (2010); and a volume on ethics entitled Practical Philosophy (2009).  He published two books intended for a general audience: Seeking Meaning and Making Sense (2008), and The Church and the World (2008).

In 1997 he received an honorary LL.D. from St Anselm College, New Hampshire, USA, and in 2008 he was awarded an honorary D.Litt from the University of Glasgow in recognition of his 'outstanding contribution to moral philosophy'.  In 2005 he was appointed by Pope Benedict XVI as a Consultor to the Pontifical Council for Culture.  In 2010, Professor Haldane was elected Chairman of the prestigious Royal Institute of Philosophy of Great Britain. See the press release for details on the chairmanship.