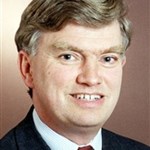 Andrew Briggs is Professor of Nanomaterials at Oxford University. He has been awarded a Royal Society Research Fellowship in the Physical Sciences, and has led several interdisciplinary projects, with major industrial sponsorship from companies such as BNFL, Toppan, Hitachi, and Hewlett-Packard. He has over 525 publications, the majority in internationally refereed journals. From 2002 – 2009 he held an EPSRC Professorial Research Fellowship, and was Director of the Quantum Information Processing Interdisciplinary Research Collaboration, with a brief to build and coordinate a multidisciplinary team of researchers to address key challenges in QIP.

He is a Professorial Fellow of St Anne’s College, an Emeritus Fellow of Wolfson College, an Honorary Fellow of the Royal Microscopical Society, and a Fellow of the Institute of Physics. He has a degree in Theology from Cambridge University. From 1992-2002 he was Professeur invité at École Polytechnique Fédérale de Lausanne, and in 2002 he was Visiting Professor at the University of New South Wales; he is Guest Professor at the State Key Laboratory for Nanotechnology in Wuhan, China. He is a member of the EPSRC Peer Review College.

He serves on the Board of Management of the Ian Ramsey Centre. He is on the Editorial Boards of Science & Christian Belief, Current Opinion in Solid State and Materials Science and Journal of Physics D: Applied Physics, and the Fellowships Committee of The Royal Commission for the Exhibition of 1851 and the Engineering Review Panel of the Newton International Fellowships. In 1986 he was awarded the Holliday Prize of the Institute of Metals, and in 1999 was a winner of the Metrology for World Class Manufacturing Award. In 2007 he won a prize in the Oxfordshire Science Writing Competition for an article entitled Molecules are Real.

Read the abstract of the paper Professor Briggs presented for STI's meeting Is Science Compatible with Our Desire for Freedom?