The Responsible Corporation in a Global Economy

No longer only the domain of corporate public relations, corporate social responsibility (CSR) has now become a serious concern for many firms and a major sphere of academic research. 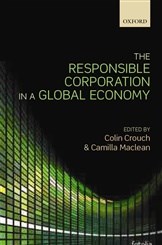 However, most strikingly, by encouraging corporations to play a role in economic governance, particularly at the global level, CSR also raises issues for political science, public policy, and the world of politics as a whole.

In this volume, authors consider what defines a 'responsible' corporation, examining such debates as: the implications of corporations setting standards for such matters as products and labor conditions, and thus playing more than a market role in the global economy; how the concept of corporate citizenship has been applied to the role of firms in corporate responsibility initiatives and what this means in terms of rights and responsibilities, and for citizenship in general; and whether corporate responsibility is compatible with shareholder maximization, specifically in the context of the global economy

Bringing together the academics and practitioners who participated in the The Responsible Corporation in a Global Economy STI Experts Meeting held at Warwick Business School in 2009, this volume examines the increasingly important arena of global economic governance and the role played by major corporations from a diverse range of perspectives. It will be of particular interest to academics, researchers, and students of Business, Political Science, and other social sciences, as well as business practitioners interested in CSR.