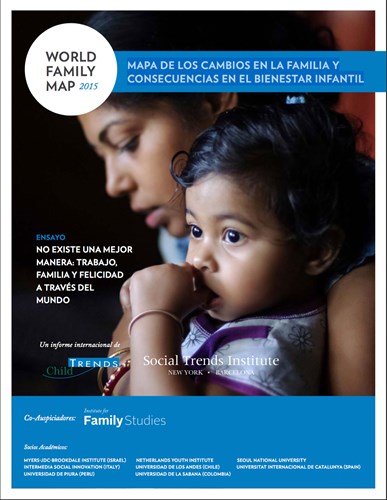 STI and Child Trends have published the World Family Map 2015 in Spanish, as was done with previous editions. The report has been translated as "Mapa de los cambios en la familia y consecuencias en el bienestar infantil" and is available to download in both Spanish and English.

The study provides the latest insights into the global health of the family across nearly fifty countries that harbor the majority of the world’s population. The report offers key findings of 16 indicators on family, organized in four areas: family structure, family socioeconomics, family process, and family culture.

As every year, the report includes an original essay focusing on a concrete aspect of family life. The main essay this year focuses on work-family arrangements around the globe and how they relate to happiness. Laurie DeRose, Frances Goldscheider, Andrés Salazar, Paúl Corcuera, Montserrat Gas, Reynaldo Rivera and Claudia Tarud sign it.

The topic of this edition’s supplement is the division of paid and domestic work among couples in Perú. Because of this, and also because the project benefits from the collaboration of several Spanish-speaking institutions, it was imperative that the study be available in Spanish. Among other institutions, the University of Piura (Perú), the University of the Andes (Chile), the University of La Sabana (Colombia) and the International University of Catalonia (Spain), have had a crucial role in the publication of the World Family Map 2015.

The Institute for Family Studies (which co-sponsors the report), The Myers-Jdc-Brookdale Institute (Israel), Intermedia Social Innovation (Italy), the Netherlands Youth Institute (Holland) and the Seoul National University (South Korea) complete the list of institutes and research centers that have participated in this edition of the World Family Map.