STI continues to support important research into family trends around the globe. 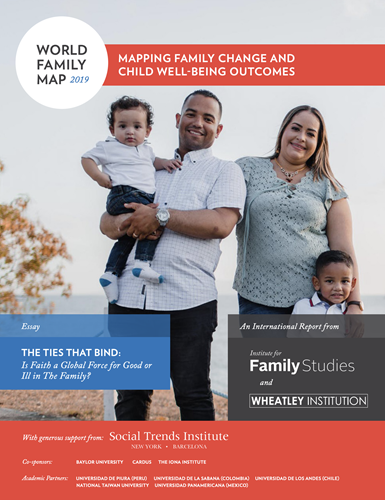 Laurie DeRose W. Bradford Wilcox
News
Faith as a Force for Good in Family Life the World Over

This year’s Executive Summary, titled “The Ties that Bind: Is Faith a Global Force for Good or Ill in the Family?” addresses that question by considering the relationship between religion and four key family outcomes: relationship quality, fertility, domestic violence and infidelity, in 11 countries around the globe: Argentina, Australia, Chile, Canada, Colombia, France, Ireland, Mexico, Peru, the United Kingdom, and the United States. It uses data from the World Values Survey and the Global Family and Gender Survey.

Chapter 1 is dedicated to “Faith and Fertility in the 21st Century,” chapter 2 to “Religion and Relationship Quality,” and Chapter 3 to “Religion, Domestic Violence, and Infidelity.” There is an additional Sidebar titled “The Family that Prays Together Flourishes Together.” And as in every previous edition, the Report includes the World Family Map Indicators: 30 pages of up-to-date data for 49 countries that are home to the majority of the world’s population on 16 indicators of family well-being in four major areas:

The inaugural edition of the World Family Map provided indicators of family well-being worldwide and an essay focusing on family living arrangements and education outcomes. The 2014 edition provided updated indicators and a new essay focusing on union stability and early childhood health in developing countries, as well as a brief analysis of psychological distress among 9- to 16-year-olds in the European Union, in a supplement titled “Family Structure Across Europe and Children’s Psychological Health.”

In the 2015 edition, the focus was placed on work-family arrangements in a lead essay entitled “No One Best Way: Work, Family and Happiness the World Over.” The 2015 report additionally included a supplement reviewing the division of paid and domestic work among Peruvian couples.

In 2017, the lead report was titled “The Cohabitation-Go-Round: Cohabitation and Family Inequality across the Globe.”