This book is the Spanish translation of Marriage and the Public Good: Ten Principles. 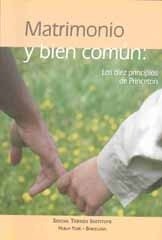 Marriage protects children, men and women, and the common good. The health of marriage is particularly important in a free society, which depends upon citizens to govern their private life and rear their children responsibly, thus limiting the scope, size and power of the state.

The retreat from marriage has been particularly consequential for society's most vulnerable communities: minorities and the poor pay a disproportionately heavy price when marriage declines in their communities. Marriage also offers men and women as spouses a good they can have in no other way: a mutual and complete giving of the self. Thus, marriage understood as the enduring union of husband and wife is both a good in itself and also advances the public interest.

This volume presents conclusions from the Why Marriage is in the Public Interest 2004 Experts Meeting in Princeton, which STI co-sponsored with the Witherspoon Institute. The document was signed by 70 distinguished university professors from academic disciplines as varied as:  philosophy, law, political science, ethics, public policy, anthropology, government, theology and history.  The case is presented in the following chapters: