How humanitarian is humanitarianism?  Here it is assessed both in terms of its progressive potential and its potential to collude with relationships of domination. The collection examines the moral dimension of humanitarianism and its sociological value. 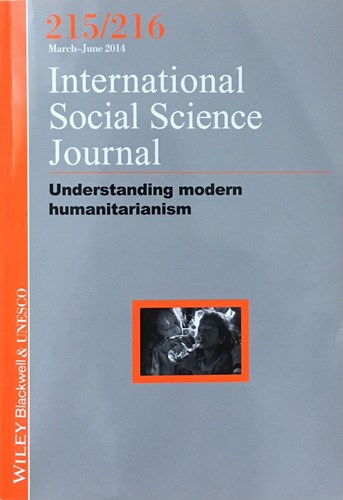 Humanitarianism has often been understood by researchers as a moral doctrine that guides the actions of a set group of international organizations and agencies committed to the relief of global human suffering.  However, contemporary academic accounts of humanitarianism are being challenged to combat its ‘presentist orientation’ by engaging more critically and analytically in its origins, diversity and current status.  This special issue starts from the premise that the study of modern humanitarianism requires new understanding of our societies and their history.  The articles featured are examples of scholarship critically questioning the values, practices and representations of humanitarianism, while also being invested in the effort to re-think and reappraise its meaning and involvement in changing socialities and political aspirations.  In each instance the authors attend to many conflicts of interpretation and contestations of value to reveal how these are productive for thought and action.