Global Finance on Screen: From Wall Street to Side Street

Global Finance on Screen is the first collection exclusively dedicated to a growing body of multi-format and multimedia audiovisual work that this book designates as the finance film. 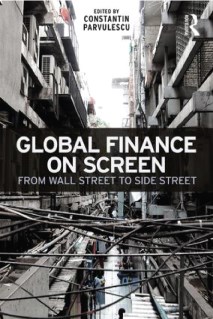 Finance film provides critical visualizations of the secretive, elitist, PR firewalled, and gender and race-biased world of finance, and its mysterious characters, jargon and products. It reconstructs for the screen and for broader audiences finance’s logics, responsibilities, practices, and ethos, and traces the effects of money, markets, investment, credit, debt, bubbles, and crashes on our well-being, desires, values, and actions.

The chapters for this interdisciplinary collection are written by European and North American scholars in film studies, anthropology, business ethics, cultural studies, political economy, and sociology. They reveal and evaluate the ability of film to document financial cultures; reflect economic, cultural and political transformations related to financialization; indicate the alienating and exploitative consequences of the growing role played by financial services in the global economy; mobilize social action against finance’s excesses; as well as spread finance and capitalist mythology. The collection offers in-depth investigations of feature films such as Wall Street, Freefall, Margin Call, Justice&Co, The Wolf of Wall Street, and The Big Short, and documentaries such as Inside Job, Capitalism: A Love Story and In a Strange Land.

Robert Burgoyne, “Forms of Time and the Chronotope in the Wall Street Film”

Karen Ho, “Finance, Crisis, and Hollywood: Critique and Recuperation of Wall Street in Films about the Great Recession”

Constantin Parvulescu, “Boiler Room and the Financialization of the American Economy”

Araceli Rodríguez Mateos, “Precarity and Vulnerability: Documentaries on the Crisis in Spain”

PostScript: Notes of a Filmmaker

Michael Chanan, “How to Make a Film about Money and Debt without Any Money and without Falling into Debt”

Read the reviews and buy it from Routledge