The Thriving Society: On the Social Conditions of Human Flourishing

STI is pleased to announce a new collection of essays in which seven STI collaborators contribute chapters.  It was published by the Witherspoon Institute and co-sponsored by STI. 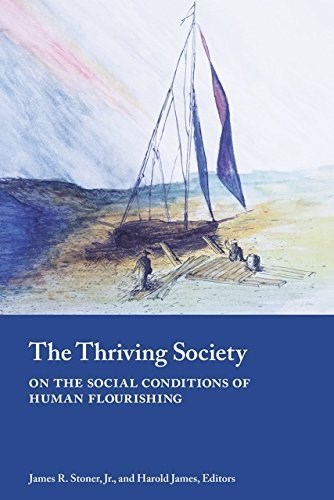 Between the scylla of utopia and the charybdis of despair, the authors of these essays consider how modern society and its various institutions might be guided so that those who inhabit them might flourish. From a variety of perspectives and with diverse expertise, the essayists in The Thriving Society discuss foundational issues, institutional challenges, and controversial policies, from market freedom to family stability, from university culture to foreign affairs and public health. They neither supply a handbook for reform nor pen an apology for the past or the present. Instead, they launch citizens on a path to understanding how contemporary social practices sometimes facilitate and sometimes threaten human happiness–and so encourage citizens to think and act in responsible and innovative ways.

The book opens with essays on first principles by George, Haldane and James, followed by essays examining the person, the family, law and government, the university, economic institutions, religion, foreign policy, and healthcare. The differences among the authors in topics and perspective produce a lively if often implicit debate among intellectual friends. In this respect, perhaps they model the kind of society they anticipate or promote.

Praise for The Thriving Society:

“The scholars of the Witherspoon Institute have dedicated their careers to holding our nation accountable to its ideals. In The Thiving Society they consider the future of our culture; for those invested in our nation, its institutions, and their fellow man, it is essential reading.”

“Our social and cultural debates too often take the prerequisites for a thriving society for granted. But it is precisely those prerequisites that are now at risk in American life. Securing them against those risks is the defining challenge of our time—a challenge that goes beyond politics, beyond culture, to the deepest human truths. This volume of essays offers wise, profound reflections on those preconditions for flourishing. It is an essential handbook for anyone concerned for the future of American life.”

“Is an economically, socially, and morally thriving society a lucky accident? This engaging volume suggests not. Instead, its diverse and distinguished authors attempt to specify certain of the conditions under which societies thrive, and how we might predictably and reliably foster those conditions through both social norms and public laws. From Harvey C. Mansfield’s deep philosophical reflection on “the majesty of the law” to Jesús Fernández-Villaverde’s deft discourse on healthcare policy, the essays in this volume will stimulate and challenge readers of every intellectual and ideological stripe.”

“There is no shortage of learned tomes on why great civilizations die, but the distinguished authors of these essays tackle a challenge of far more immediate interest. In the spirit of Tocqueville they ask: What can help a decent society to survive and thrive? Their answers are sobering, surprising, enlightening, and inspiring.”