Is Science Compatible with Free Will?

The world and the brain are governed to some extent by non-material agencies, and limited consciousness does not abolish free will and responsibility. 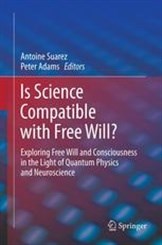 Antoine Suarez and Peter Adams (eds.), Is Science Compatible with Free Will?: Exploring Free Will and Consciousness in the Light of Quantum Physics and Neuroscience, Springer, 2013, 326pp.

The book compiles the papers presented at STI's 2010 Experts Meeting "Is Science Compatible with Our Desire for Freedom?" and includes others specifically written for this volume.

There is a conflict between the daily life conviction that a human being has free will, and deterministic neuroscience. When faced with this conflict two alternative positions are possible: Either human freedom is an illusion, or deterministic neuroscience is not the last word on the brain and will eventually be superseded by a neuroscience that admits processes not completely determined by the past. This book investigates whether it is possible to have a science in which there is room for human freedom. The book generally concludes that the world and the brain are governed to some extent by non-material agencies, and limited consciousness does not abolish free will and responsibility.

The authors present perspectives coming from different disciplines (Neuroscience, Quantum Physics and Philosophy) and range from those focusing on the scientific background, to those highlighting rather more a philosophical analysis. However, all chapters share a common characteristic: they take current scientific observations and data as a basis from which to draw philosophical implications. It is these features that make this volume unique, an exceptional interdisciplinary approach combining scientific strength and philosophical profundity.

You can buy the book, read chapter abstracts and download individual essays at SpringerLink.

Read the introductions at Amazon.

Nicolas Gisin - Université de Genève
Are There Quantum Effects Coming from Outside Space-time? Nonlocality, Free Will and ”No Many-Worlds”

Zeeya Merali - Freelance Science Writer
Are Humans the Only Free Agents in the Universe?

Robert Kane - University of Texas
Can a Traditional Libertarian or Incompatibilist Free Will Be Reconciled  With Modern Science? Steps Toward a Positive Answer

Peter Adams – Thomas More Institute – and Antoine Suarez - Center for Quantum Philosophy
Exploring Free Will and Consciousness in the Light of Quantum Physics and Neuroscience.