Embryo: A Defense of Human Life 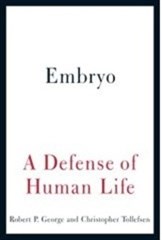 The book, which considers the nature and rights of human embryos, argues against embryonic stem cell research of any kind and summarizes scientific alternatives to such research.  The publisher explains:

“Typically, right-to-life arguments have been based explicitly on moral and religious grounds. In Embryo, the authors eschew religious arguments and make a purely scientific and philosophical case that the fetus, from the instant of conception, is a human being, with all the moral and political rights inherent in that status. As such, stem cell research that destroys a viable embryo represents the unacceptable taking of a human life.”

Buy the book, which was financially supported by STI and co-sponsored by the Witherspoon Institute, at Amazon.

The Second edition, published in January, 2011, is available from amazon in a kindle as well as a paperback edition.

Robert P. George, a member of the President’s Council on Bioethics, is a professor of jurisprudence and director of the James Madison Program in American Ideals and Institutions at Princeton University. He is the author of Making Men Moral, In Defense of Natural Law, and The Clash of Orthodoxies. He lives in Princeton, New Jersey.

Christopher Tollefsen is an associate professor in the department of philosophy at the University of South Carolina, the director of the graduate program in philosophy, and author of Biomedical Research and Beyond. He lives in Columbia, South Carolina.