Sociologist Laurie DeRose and her colleague Anna Barren explain interesting new research into the relationship between faith and fertility choices, using the case of Poland as an example.

There is a strong tie between religiosity and childbearing across cultures and countries, but there is nonetheless still much we don’t understand about how faith influences fertility. Christoph Bein, Monika Mynarska, and Anne Gauthier’s recent research filled one of the gaps in our understanding by showing that, at least in Poland, perceived costs of childbearing have little effect on the plans of those who find religion important, while heavily dissuading others. Their work may help explain the limited efficacy of Poland’s aggressive pro-natalist policies.

Bein and his coauthors carefully teased apart the interplay of religion and the perceived benefits and costs of childbearing. Costs refer to emotions like stress, worries and anxiety, and also to monetary expenses, physical tolls of pregnancy, and lost time for leisure. Benefits similarly have an emotional layer, i.e. affiliation, accomplishment, novelty, connection; as well as more instrumental aspects, such as economic utility and fulfilling norms of morality and religion. This study measured religion by the reported importance people placed on religion in their own lives (academics call it “religious salience”), rather than measuring religiosity by the frequency of religious service attendance.

First, the research team measured the effect religious salience has on fertility intentions. Not surprisingly, people for whom religion is more important in their lives perceived greater benefits to having kids and lower costs. 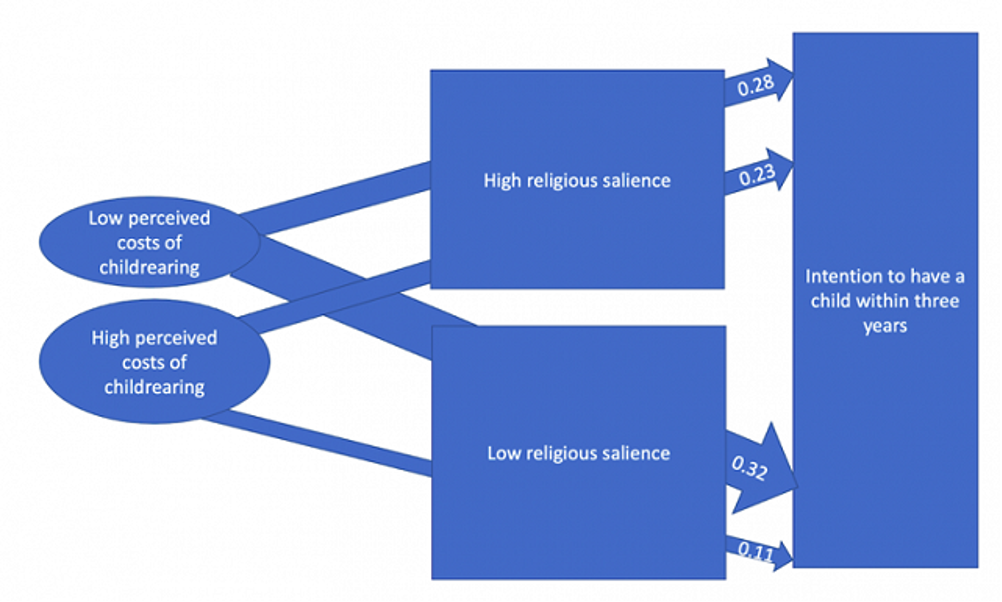 Poland is a highly religious country: 61% attend religious services at least monthly, and 87% are affiliated with the Catholic Church. And yet Polish women are currently averaging 1.4 children per woman. Bein, Mynarska, and Gauthier’s research makes it abundantly clear that higher fertility among the more religious can coexist with low overall fertility. Polish women averaged the replacement rate of 2.1 children back in 1990, but fertility began falling during the collapse of communism, and was down to 1.2 children by 2003.

There has been modest recovery since then, what Lyman Stone referred to as Poland’s “baby bump” to emphasize that rising to 1.4 children per woman was hardly a boom. In April 2016, the Polish government began providing cash allowances to families with at least two children. Without going into the details of the Family 500+ program or its change over time, suffice it to say that benefits were large enough to greatly offset the financial burden of childrearing, and even leave some families better off economically than if they had fewer children.

We suggest that one of the reasons why generous cash subsidies have not promoted childbearing more in Poland is found in Bein, Mynarska, and Gauthier’s analysis: For the highly religious majority, perceived costs are not importantly related to childbearing plans. That doesn’t render the subsidies unimportant in people’s lives, but it does indicate that only a minority could be expected to alter their fertility intentions when the costs went down.

This article is reproduced with permission of the Institute for Family Studies.  The original, with links to source material, can be found here.