Richard Reeves takes issue with some of the ways upper-middle-class families perpetuate their relative advantages, locking-in and even increasing inequality. He identifies behaviors he calls 'dream hoarding,' those that unfairly corner the American dream for those who are already living it.

“Upper middle-class families have become greenhouses for the cultivation of human capital," writes Brookings Institution senior fellow Richard Reeves in his new book, Dream Hoarders. "Children raised in them are on a different track than ordinary Americans, right from the very beginning.” As he shows in the book, the children of upper middle-class parents enjoy more than just an economic advantage over their lower income peers—they also enjoy a family stability advantage. That’s because upper middle-class parents are more likely to be married, stay married, and invest more in parenting. But how much of their children's success can be attributed to the stability of their family life? That is a question Reeves addressed in a lecture he gave last week at the University of Virginia, where I had the opportunity to ask him more about the role of marriage in shaping the futures of children raised in upper middle-class families. Following is an edited transcript of that interview. 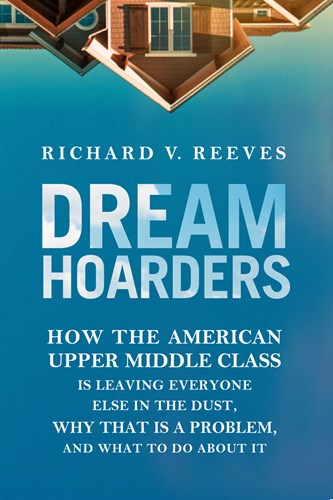 In Dream Hoarders, you show that marriage is alive and well in the upper middle class, and you acknowledge that the family stability that these parents are giving their kids is at least part of the reason they’re doing so well. How much of a role do you think this thriving culture of marriage (as opposed to just parents’ education and income) is playing in boosting the chances of success for kids from upper-middle-class families?

I think that it’s very hard to disentangle the impact of stable families, and therefore of marriage, on learning more broadly. So, if we think about this as human capital formation, generally, which starts before birth all the way through to college, then what sociologists call the family learning environment is a hugely important part of that. So, I just think empirically, it’s going to be impossible to disentangle the effects because what we see is that highly educated parents, who are also highly engaged parents, are the ones who are creating a good environment at home. So, just as a matter of social science, disentangling all the effects would be very, very difficult to do. But it is clear to me, from the evidence, that family stability is independently valuable of education as normally defined because family stability creates a better environment within which kids can develop and grow.

The question then becomes how far is marriage the predictor of family stability or the signal of a couple who wants to remain stable, and that’s a long-standing argument that many of us have been having for a long time, and I think the truth is that no one sensible thinks that marriage isn’t having some causal effect on stability. The question is how much. From my point of view, I want to send a stability message because I think it applies just as much to single parents or those who are not married, as to those who are married. So, if you are cohabiting couple, for example, and you haven’t gotten married, creating a stable environment, that’s what counts. If getting married helps you do that, great, but that’s the means to the end and not the end in itself.

How much is this focus on involved parenting among the upper middle class about cultural, versus economic factors?

I think there’s a specific issue about engaged, active high-quality parenting. And we do see a very big gap in that kind of parenting by the educational and economic background of the parents, and a big gap between parents who are married and those who aren’t. There’s actually a long-standing literature [showing] there’s a different approach to parenting at the top of the distribution between those who are upper middle-class parents and those who are lower down. There’s a concerted cultivation (to use the phrase) which is that those parents who are up toward the top see it as a professional activity to their kids, whereas parents who are working-class or middle-class background, tend to see their role being to keep their kids safe and well nourished, get them to school, etcetera, but they don’t see themselves as their children’s teachers. Upper-middle-class parents see themselves as teachers, as well as the teachers and tutors, and everybody else. It’s a very different culture of parenting.

And does that have anything to do with marriage?

Well, again, most of the parents who are committed to being engaged parents and to doing so together are almost all married. So, there is a very strong correlation between married parents and parents who are highly-engaged. The difficulty from a social science perspective is that one of the reasons those people got married is to have children together and raise them together. In fact, marriage provides the framework in which most people still want to raise children. And upper middle-class parents are doing that: they are getting married first, they are having their kids, and they are staying together much more so than couples from elsewhere. All of these things come together—parenting, education, marriage, and economics—to create a cluster of advantage for the kids that are fortunate enough to be born into those families.

Upper middle-class parents are getting married first, they are having kids, and they are staying together much more so than couples from elsewhere. All of these things come together—parenting, education, marriage, and economics—to create a cluster of advantage for the kids that are fortunate enough to be born into those families.

Do you think the upper middle class has become more marriage-centered since the height of the divorce revolution in 1970s and early 1980s, and, if so, why?

I don’t think they have. I don’t think it’s possible to claim that they have become more marriage-centered, but I think it’s very reasonable to claim they have not become less marriage centered. So, the drop in the marriage rate among college graduates is very insignificant, essentially flat, and if anything, the divorce rates seem to be somewhat lower among younger college graduates compared to their parents’ generation. So, overall, I think you have to say that marriage is pretty much as alive and well among today’s upper middle-class parents as it was in the previous generation.

My exception to that might be that marriage has become more child-centric for upper middle-class parents. It has become more of a way in which highly-educated, committed parents signal to their kids and to each other and to society that, “hey we are going to raise our kids together.” I think that the nature of marriage for upper middle-class parents has changed somewhat and that’s probably because of changing economic rates between women and men. And I think to understand marriage in America today, to understand marriage more generally, we have to answer the question of why it is that the most economically powerful women in the history of the world (maybe that’s a slight exaggeration but not much), i.e. college-educated American women, are marrying and marrying in such great numbers against all the predictions of sociologists and social scientists from the 70s and 80s…In fact, if you ask family scholars and sociologists what they were writing about the future of marriage in 1970, this is not what they predicted. They predicted that [with] the rise of feminism and the rise of women’s economic power, especially at the top, marriage would become less and less prevalent at the top. That is not what’s happening. So, I think we really have to understand what the motivation for marriage is today if we are going to think about the kinds of marriages that we want. And the kinds of marriages I think we want are the ones which are good for children, and the kinds of marriages that will close the class gap, as I talk about in my book, Dream Hoarders.

That leads me to a big question I have from your book. You acknowledge the link between marriage and the success of the upper middle class in your list of policy recommendations, but you do not directly suggest encouraging marriage among lower-income Americans, where marriage is in retreat. Why not speak more directly to reviving a marriage culture there?

Well, I think there are a couple of reasons for that. One reason is that I am not convinced that there are good examples of interventions that have promoted marriage. I think that even those who are more pro-marriage than perhaps I am will acknowledge that. My colleague, Ron Haskins did a good review of all the marriage promotion programs, and it just did not really have the effects that were desired. I think as policymakers, even if we want [to achieve] A, then we have to recognize when something is not getting us towards A. And that’s as true of the evidence on early years’ education or whatever. So as a matter of policy it doesn’t work. Secondly, I think that the problem is not so much that people of lesser means, or middle class, don’t want to get married or are not interested in marriage, but that they see certain barriers to marriage, which I think are due to outdated gender roles and what they expect of men, so there has to be a change in the way we think about that.

But also, the way in which people become parents is actually is quite destructive of the sorts of relationships that lead to successful marriages. And there’s good evidence from the Joint Economic Committee that one of the really big reasons for the rise in births outside of marriage is the drop in shotgun marriages. So, a big contributor to that number is the fact that in the past, if you had sex with someone outside of marriage and got pregnant, you got married. Now people are like, “No I don’t want to marry them, we got pregnant by mistake, but I certainly don’t want to spend the rest of my life with them.” When in the past, they might have done. Now, whether you see that as a good or bad thing, we will put to one side for a minute, but what that leads me to is quite a strong conviction—unless we can get back to a society [where] most people wait until marriage to have sex, which we have not had for a long time (not just decades, but I would suggest centuries), then actually effective contraception is the best pro-marriage policy around. It may not be the most direct way to promote marriage, but I am absolutely convinced that if you can help people to decide when and where they become parents, one of the results would be that more of them would decide to get married first, rather than having this marriage go-round or this instability that we see.

I think that’s the foundation, and I think that should be a place where people of all political persuasions should agree. But it turns out that lots of conservatives are very nervous about contraception and access to family planning, and so I am saddened, in a way, that this is not a place where we can agree. I think it’s a hugely effective way to reduce abortion (I think that’s proven), and I think it would be a way to promote marriage, too. We are at a stalemate at the moment, where liberals don’t like talking about marriage, and conservatives don’t like talking about contraception, and in the meantime, no one really gets anything done.

This interview, written by Alysse ElHage, was originally printed by the Institute for Family Studies on January 29, 2018