Don’t Expect a Wave of ‘Coronababies’ 9 Months from Now, Nor Any Time Soon

Not only will the COVID-19 pandemic not result in the birth of ‘coronababies’ conceived in confinement, explains demographic researcher Lyman Stone, it is almost certain to produce the opposite effect. He shared his findings with housebound viewers around the globe in an April 3 Webinar titled “Will Coronavirus Boost Fertility.”

All of Stone’s data on high mortality events across the globe over at least the last 100 years lead to the conclusion that the term “coronababies” is a mistaken, as well as rather flippant, take on perhaps a quarter of the world’s population being locked down to slow the spread of a deadly virus.

Stone shared slide after slide depicting birth rates in the months before, during and after deadly events in history like the so-called “Spanish” flu of 1918 and other bad flu outbreaks, the SARS epidemic, Tsunamis, Tornados, and Hurricanes in numerous countries around the world.  Some slides removed the natural disasters and compared only epidemics. No matter how many colored lines there were on the graphs, they all looked the same.

As we still cannot say with certainty how catastrophic the COVID-19 pandemic will turn out to be, it is not possible to say anything educated about its effects on long or mid-term birth rates. There are precedents for predictions based on the number of people infected and the mortality rate. But the current estimates on those numbers are guestimates so wide-ranging as to yield vastly differing outcomes. The lowest estimates of infection and mortality would not appreciably affect fertility at all, while the worst–case scenarios of potential infection and death rates would lead to a halving of birth rates.

What it is possible to affirm, though, is that statistics on prior high-mortality events all point to fewer births from 7-10 months after the event. Coronababies are not on the horizon. Stone’s graph below depicts the average, notable drop in births around 9 months after the devastating event depicted by the solid vertical line. 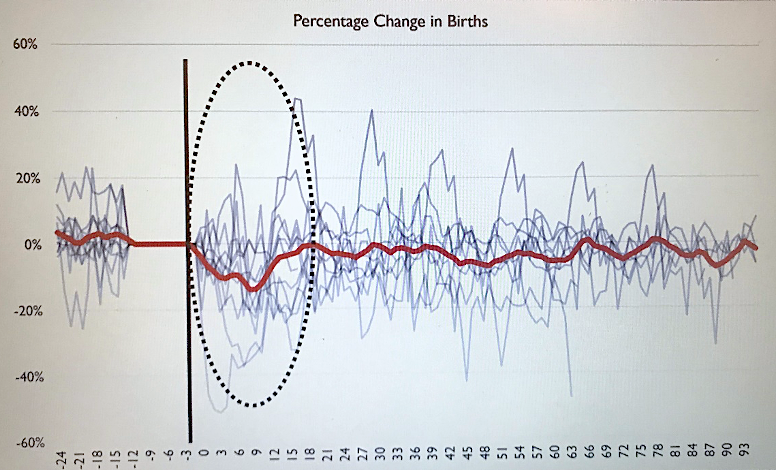 There is some academic research to support the idea that shared “downtime” sometimes results in more births around 9 months later. But these are only in cases of events like power outages and mild weather advisories. In any case, this “pure quarantine effect” is always quite small. When death and/or destruction cause people’s confinement, births invariably decrease.  Some of the possible reasons for this are not difficult to imagine. Women of childbearing age may die; Their spouses may die; Sick people are less sexually active; People physically separated from their partners cannot procreate even if they wanted to; Ill health - fever in particular- leads to increased miscarriage risk; uncertainty, fear, unemployment and economic hardship reduce fertility intentions and increase demand for abortion.

High mortality situations or events produce “death spikes” that are always followed by lower fertility in the near term.  How long rates take to get back to normal depend on how grave and widespread the event, and how many collateral survivors it produced. Collateral survivors are people who survived the event but who suffered ill effects caused by it – losing an important loved one, their home or livelihood, for example.

“Because COVID is very infectious, but not extremely lethal, there will likely be a large number of collateral survivors, suggesting that births in the immediate wake of a COVID outbreak should fall considerably,” said Stone.