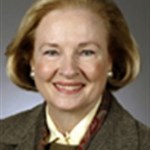 Mary Ann Glendon is the Learned Hand Professor of Law at Harvard University, President of the Pontifical Academy of Social Sciences, and former U.S. Ambassador to the Holy See (2008-2009).

She writes and teaches in the fields of human rights, comparative law, property, constitutional law and political theory.  Her most recent book, Traditions in Turmoil (2006), won the International Capri-San Michele Prize and the Premio Capalbio in 2008, and her history of the framing of the U.N.’s Universal Declaration of Human Rights, A World Made New: Eleanor Roosevelt and the Universal Declaration of Human Rights (2001) was described by the New York Times reviewer as the definitive study of that historic achievement.

Professor Glendon is a member of the American Academy of Arts and Sciences, the International Academy of Comparative Law, and is a past president of the UNESCO-sponsored International Association of Legal Science.  She served on the U.S. President’s Council on Bioethics from 2002-2005.

She has received honorary doctorates from numerous universities including the Universities of Chicago and Louvain, and is a recipient of the National Humanities Medal.  She received her Bachelor of Arts, Juris Doctor, and Master of Comparative Law degrees from the University of Chicago.