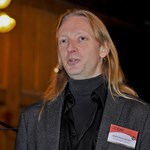 Dr. Johnny Hartz Søraker is Assistant Professor of Philosophy of technology at the Department of Philosophy, University of Twente. Although he is inspired by all kinds of philosophy, his main research interests lie in the intersections between Information Technology, on the one hand, and both theoretical and practical philosophy, on the other. He often grounds his work in psychological research, especially work in the field of Positive Psychology,  and is working on developing this toward a comprehensive methodology (tentatively entitled ‘Prudential-Empirical Ethics of Technology (PEET)’). Dr Søraker, who received the Twente teacher of the year award in 2012, publishes and lectures extensively on issues such as the ethical, societal and psychological effects of technology, especially related to the notion of well-being.