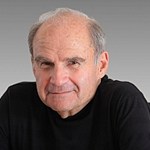 Current essays deal with the “prosumer” (one who simultaneously produces and consumes), especially on Web 2.0 sites such as Wikipedia and Facebook, and he is editing a special double-issue of the American Behavioral Scientist on that topic. His books have been translated into over twenty languages, with over a dozen translations of The McDonaldization of Society alone.

Read the abstract of the paper Professor Ritzer presented for STI's Being Human in a Consumer Society experts meeting.