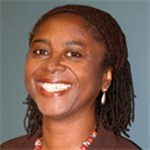 Abena Busia is an associate professor of the Departments of English, and Women’s and Gender Studies at Rutgers, The State University of New Jersey, where she has taught since 1981. Born in Accra, Ghana, she settled with her family in the United Kingdom where she earned a degree in English language and literature at St. Anne’s College in 1976, and a Ph.D. in social anthropology at St. Antony’s College in 1984.

Professor Busia is the co-editor of Theorizing Black Feminisms: The Visionary Pragmatism of Black Women, and Beyond Survival: African Literature & the Search for New Life.

She lectures and publishes widely on Black literature and curriculum transformation for race and gender. In addition, she coordinates Women Writing Africa, a multi-volume publishing project for cultural reconstruction.

Professor Busia’s poetry has been published in several magazines and anthologies in North America, Europe, and West Africa. Her poetry volume, Testimonies of Exile, was published in 1990.