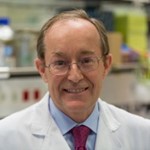 Dr. Luis M. Montuenga obtained his degree in Biology from the University of Navarra in 1981 and the PhD from the same University in 1985. He also has a Masters degree in Neuroendocrine Cell Biology from University College London. In 1989-1990, he worked as a postdoctoral fellow at the Royal Postgraduate Medical School (Hammersmith Hospital, London). Between 1995 and 1998 he was a visiting fellow at the Biomarkers and Prevention Research Branch of the National Cancer Institute (NIH, USA).

At present, Dr. Montuenga is the Vice-President for Research of the University of Navarra, where he is Full Professor of Cell Biology in the Schools of Medicine and Sciences. He is also the Director of the Oncology Research Division at the Center for Applied Medical Research (CIMA) of the same University, where he co-leads, together with Dr. Ruben Pio, the Laboratory of Lung Cancer Biomarkers.