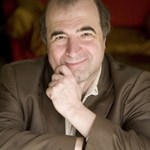 Jean Staune is Assistant Professor in Philosophy of Science in the MBA section of HEC (Paris). Dr. Staune is the founder and general secretary of the Interdisciplinary University of Paris (IUP), which has organized some of the most important meetings in science and religion in Europe.

His current research, which has implications not only for science and religion, but also for the theory of management, is based on the philosophical implications of contemporary discoveries in physics, astronomy, mathematics, biology, and neurology. He is the author of Notre Existence a-t-elle un Sens?, a French best-seller which deals with these subjects. He has also edited two collected works (Science and the Search for Meaning and La Science, l'Homme et le Monde), which include contributions from 35 authors, 11 of whom are Nobel Prize winners.

Read Professor Staune's "Beyond the Horizon On the Edge of Physics,"  a presentation of the philosoplical implications of Quantum Mechanics in a special issue of the Science and Spirit review.

Read the abstract of the paper Professor Staune presented for STI's Is Science Compatible with Our Desire for Freedom? experts meeting.