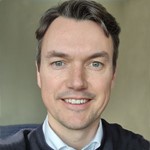 He's a Lecturer in Cultural History at the School of Journalism, Media and Culture (Cardiff University) and co-editor of the Journal of War and Culture Studies.

His current research concerns media history and visual culture in contemporary Europe with specialisms in photojournalism and conflict, visual culture and reconstruction, collective memory in post-conflict societies, and urban history.

He's working on two monographs. The first addresses postwar reconstruction and photography of the built environment in Britain, France and West Germany (c.1944-1961). The second is Conflicting Images: Histories of War Photojournalism, co-authored with Stuart Allan.

He's also Co-Investigator on a collaborative project with the University of Edinburgh addressing the role of photography in historic and present-day peacebuilding initiatives. This research is funded by the Social Trends Institute.

Before he joining Cardiff University, he was a Lecturer in Modern History at Swansea University. He was also held fellowships at the universities of Edinburgh and Nottingham. Prior to postgraduate research, he worked in Scotland for around 10 years at the Heritage Lottery Fund (a major UK funder of museums, galleries and heritage sties).