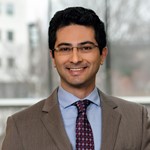 Sherif Girgis received a Master's Degree in philosophy from the University of Oxford, where he studied as a Rhodes Scolar from 2008-2010. he is currently pursuing a PhD in philosophy at Princeton and a JD at Yale Law School. His paper “What Is Marriage?” coauthored with Robert George and Ryan Anderson, quickly became Social Science Research Network’s most downloaded paper of the year. Their book on the same subject, What Is Marriage?: Man and Woman: A Defense, which improves and expands on the article, was released in 2012. In addition to publishing in more popular contexts, he has given lectures and talks and engaged in debates on marriage and related topics throughout the United States and abroad.