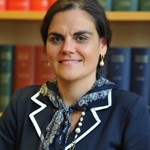 Dr. Rosa María Lastra is Sir John Lubbock Chair in Banking Law and Professor in International Financial and Monetary Law of the Centre for Commercial Law Studies (CCLS), Queen Mary University of London. She is a member of Monetary Committee of the International Law Association (MOCOMILA), a founding member of the European Shadow Financial Regulatory Committee (ESFRC), an associate of the Financial Markets Group of the London School of Economics and Political Science, and an affiliated scholar of the Centre for the Study of Central Banks at New York University School of Law. She is also a member of the Monetary Expert Panel of the European Parliament.

From 2008 to 2010 she was a Visiting Professor of the University of Stockholm. She has served as a consultant to the International Monetary Fund, the European Central Bank, the World Bank, the Asian Development Bank and the Federal Reserve Bank of New York. From November 2008 to June 2009 she acted as Specialist Adviser to the European Union Committee of the House of Lords regarding its Inquiry into EU Financial Regulation and responses to the financial crisis. Prior to coming to London, she was Assistant Professor of International Banking at Columbia University School of International and Public Affairs in New York (1993-1996). From January 1992 to September 1993 she was a consultant in the Legal Department of the International Monetary Fund in Washington D.C. She studied at Valladolid University, Madrid University, London School of Economics and Political Science and Harvard Law School (Fulbright Fellow).