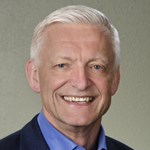 He has been a Fellow at the Woodrow Wilson International Center for Scholars (2012-2013), at the Center for Advanced Study in the Behavioral Sciences at Stanford University (2007-2008), and at the Council on Foreign Relations (1994-1996 and currently).

He is a member of the Editorial Board of International Organization. His current research centers on the role of emerging economies in global governance and challenges to the nation-state as a dominant unit in the international system.

Recent publications include Integrating Regions: Asia in Comparative Context (co-editor, Stanford University Press), Politics in the New Hard Times (co-editor and contributor, Cornell University Press), and Rising Powers and Global Governance: Negotiating Change in a Resilient Status Quo, (International Affairs, 2013). He received A. B. and Ph.D. degrees from Harvard University and a B. Phil. (M. Phil.) degree from Oxford University.