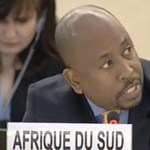 Luvuyo Ndimeni is the director of social development at the UN Multilateral at Head Office. He completed his master’s degree in public administration at Columbia University, focusing on international economics and the impacts of globalization, environment, human rights, and good governance within the multilateral system.

Prior to his current position, Mr. Ndimeni was posted at the Permanent Mission to the United Nations from 2000 to 2005, where he was responsible for negotiating South Africa’s positions on human rights, social development, crime, and drugs. In addition, Mr. Ndimeni represented South Africa in the annual sessions of the Commission on Human Rights (CHR) in Geneva from 2000 to 2005. He established and managed the African Group of Third Committee Experts in New York during the era of UN reform negotiations.