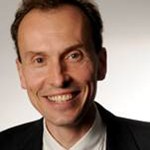 Professor Jolyon Mitchell is Professor of Communications, Arts and Religion; Acting Director of the Institute for Advanced Studies in the Humanities (IASH); and Director of the Centre for Theology and Public Issues (CTPI) at the University of Edinburgh. He is also President of the UK's National Association for Theology and Religious Studies (TRS UK). He directs a number of interdisciplinary research projects (several on peacebuilding). Educated at Cambridge, Durham, and Edinburgh Universities, Jolyon Mitchell worked as a producer and journalist for BBC World Service and BBC Radio 4 before he was appointed to the University of Edinburgh.

His publications reflect some of his research interests and include: Promoting Peace, Inciting Violence: The Role of Religion and Media (Routledge: 2012); Religion and the News (co-editor, Ashgate, 2012); Martyrdom: A Very Short Introduction (Oxford University Press, 2012); Media Violence and Christian Ethics (Cambridge University Press, 2007); The Religion and Film Reader (co-editor, Routledge, 2007); Mediating Religion: Conversations in Media, Religion and Culture (co-editor, Continuum, 2003); and Visually Speaking (T&T Clark, 1999). He is also the editor of three monograph series. Prof. Mitchell is a regular broadcaster and he has given numerous invited lectures around the world. He has carried out original research in a wide range of countries both in Europe and beyond including Rwanda, South Africa, Ghana, the USA and the Philippines.

Read the abstract of the paper Professor MItchell presented for STI's What Society Needs from Media in the Age of Digital Communication meeting.