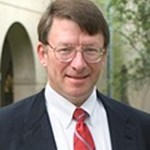 James R. Stoner, Jr. is chair of the Department of Government and a professor of political science at Louisiana State University (LSU), where he has taught since 1988. He specializes in political theory, English common law, and American constitutionalism. Professor Stoner graduated summa cum laude, with an AB from Middlebury College in 1977. He obtained both his MA (1980) and Ph.D. (1987) from Harvard University, studying under the conservative professor Harvey Mansfield. Professor Stoner is a member of the National Council for the Humanities and was appointed to that post by George W. Bush in 2002. He was the chair of the drafting committee of the Princeton Principles, a policy paper released on July 13, 2006, on the importance of marriage and the public good.