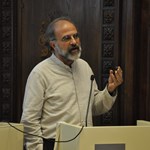 Giuseppe Longo is a Research Director CNRS (DRE) at the Cavaillès interdisciplinary center of Ecole Normale Supérieure, Paris (ENS) and adjunct professor, Immunology Dept., Tufts U., Boston. Former research director in the Dept. of Mathematics, then of Computer Science, at ENS (1990-2012), he has been Associate Professor of Mathematical Logic and, then, Professor of Computer Science at the University of Pisa (1973-1990). He spent three years in the USA (Berkeley, M.I.T., Carnegie Mellon) as researcher and visiting professor, and spent several months visiting Oxford and Utrecht. He is founder and editor-in-chief (1990-2015) of Mathematical Structures in Computer Science, Camdridge U.P.. and (co-)author of more than 100 papers and three books. He recently extended his research interests and works on the epistemology of mathematics and theoretical biology.