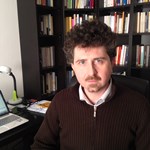 Francesco Bianchini is a senior assistant professor at the Department of Philosphy and Communication Studies of University of Bologna. His research concerns the philosophy of cognitive science, artificial intelligence and epistemology of artificial sciences. Subjects of his research are also connected to language, concepts and simulative cognitive modeling, especially biologically inspired cognitive architectures. He is interested in some forms of inductive reasoning too, especially in analogy and in the use of models in scientific explanation. He spent several periods at the Indiana University in Bloomington and he is the author of books and articles in international journals.