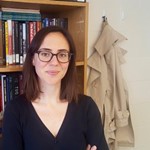 Elif Kalaycioglu is a Postdoctoral Research Associate at Princeton University's Niehaus Center for Globalization and Governance and an Assistant Professor at University of Alabama's Political Science Department. Her esearch focuses on the world heritage regime, as it has both risen to prominence and is facing a fundamental crisis at the present moment.

She argues that the prominence of the regime is tied up with the already existing but rarely acknowledged valuational underbelly of international politics, involving conceptions of the human, history and aesthetics. The current crisis is demonstrative of the impossibility of rendering apolitical these value judgments as well as further political contestations that are pushed to the sidelines of, but return to haunt the possibility of an apolitical universal value. This research is linked to broader historical and analytical questions. Historically, what was it about the post-WWII moment that made the founding of world heritage and its rise to prominence possible and why does the present moment strain it? Analytically, what does the crisis of world heritage tell us about other international regimes that hinge on universalist, apolitical framings of their central concerns, such as humanitarianism?