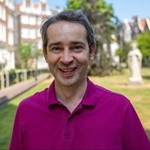 Dr. David Thunder has been a Research Fellow at the University of Navarra's Institute for Culture and Society (Religion and Civil Society Project) since September 2012. Prior to this appointment, he held several research and teaching positions in the United States, including visiting assistant professor at Bucknell and Villanova, and Postdoctoral Research Fellow in Princeton University’s James Madison Program. Dr. Thunder earned his BA and MA in philosophy at University College Dublin, and his Ph.D. in political science at the University of Notre Dame. His research, which primarily engages the work of late modern and contemporary political philosophers, attempts to come to a deeper understanding of the lived experience of persons who seek to live meaningful and worthy lives in community with others. One of the defining features of his work is its attempt to recover a more integrated or wholistic vision of human action and life in community with others, in the face of attempts by a host of modern and contemporary thinkers to isolate legal, economic, and political activity from broader concerns and values that affect the human person as person, such as the overall quality of his life and his ethical and religious commitments.

Specific issues he has taken up in his published and unpublished writings include prospects for ethical coherence in public life, the implications of role playing for responsible agency, our responsibilities toward the needy, the foundations of human dignity, and the limits of contractual accounts of political legitimacy. In 2014, Dr. Thunder published a book, entitled Citizenship and the Pursuit of the Worthy Life (Cambridge University Press), that challenged liberal and realist attempts to drive a wedge between ethical and political reasons for action, and proposed a deeper harmonisation of our civic roles with our conscientiously formed ethical and religious commitments. Most recently, he published and editer volume, The Ethics of Citizenship in the 21st Century (Springer, 2017). Dr. Thunder’s work has appeared in prominent venues such as the American Journal of Political Science, Political Theory, and Critical Review of International Social and Political Philosophy.

Watch Dr. Thunder’s presentation of his paper “The ‘Neighborhood’ as a Pivotal Element of the Infrastructure of a Flourishing Society.”