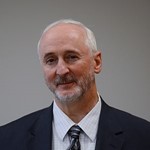 Professor of Political Science at Marquette Univeristy. His main area of research and teaching has been Constitutional Law and American Political Thought, and he is the author of The Rise of Modern Judicial Review (Basic Books, 1986; revised edition, Rowman and Littlefield, 1994), Judicial Activism: Bulwark of Liberty or Precarious Security? (revised edition, Rowman and Littlefield, 1997), and How to Read the Constitution (Rowman and Littlefield, 1996). He is the founder and President of the American Public Philosophy Institute (1989), group of scholars from various disciplines that seeks to bring natural theory to bear on contemporary scholarly and public discussions.