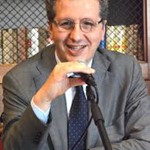 Armando Fumagalli is professor of Semiotics and Director of the Master Program in Screenwriting and Production for TV and Cinema at the Università Cattolica del Sacro Cuore in Milan. He is also a script consultant for the production company Lux Vide. In this job he has been a consultant for many international TV miniseries such as John Paul II (with CBS, starring Jon Voight) and the European 4 episode miniseries War and Peace. He is also teacher and member of the board of the Master Program in Screenwriting of the Universidad de los Andes in Chile and of a post-graduate program in audiovisual management and marketing of the LUISS University in Rome. He has published and edited many books. Among them, I vestiti nuovi del narratore is about the adaptation from literature to cinema, and Scegliere un film is an annual collection of cinema reviews that has appeared every year since 2004, co-edited with Luisa Cotta Ramosino.