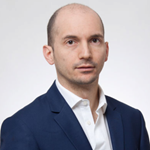 Graduated in Pharmaceutical Chemistry at University of Milan in 2009, he finalized his studies with a professional training in management in London and starting from November 2018 he is PhD student at University Campus-Biomedico. Andrea has been partner of Lead2b Limited since 2013 and has been managing the Life Science department of Actire Ltd since 2016.

Andrea is member of the Systems Biology Group Lab (University La Sapienza) under the head of prof. Mariano Bizzarri.

In 2013 he worked as scientific advisor for Fondazione Lang Italia and starting from 2014 he is Scientific Director of Fondazione Lang and Samiarc for which he has managed research projects involving six Universities in the medicine and biophysics field. His previous experiences were in Astrazeneca, Fondazione Veronesi, Istituto Neurologico Casimiro Mondino, Diatech srl, Meda Pharma, Ecker Technologies and Noventure, in wich he has managed scientific research and communication project.